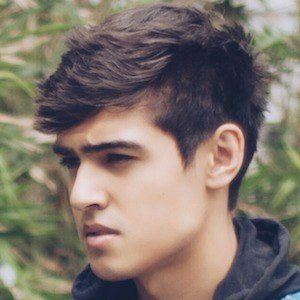 Filipino-American singer who teamed up with his twin brother Jesse Perkins to perform as a duo called the Perkins Twins. The duo released an EP called Can't Stop and became well known for the singles "Ikaw Na" and "Make Your Move."

He and Jesse released an EP called Para Lang Sayo in 2014. Prior to music, he was an athlete who excelled at basketball and tennis, playing both sports at a varsity level in high school. He and Jesse won a Grand Prix Doubles tennis championship together.

He earned an academic scholarship to attend the University of California at Berkeley. He has done some modeling, and he and Jesse would start their own tennis academy in the Philippines called the Perkins Twins Tennis Academy. He and his brother are also developing smart phone applications.

He and Jesse's parents are Tarny Perkins and Filipina mother Tess Pazziuagan. They moved to Menlo Park, California when the boys were five years old, but would return to the Philippines.

He and Jesse have covered Justin Timberlake's single "Not a Bad Thing." He and his brother are strong Christians who grew up in the church singing songs by Switchfoot, Jeremy Camp and others.

Christian Perkins Is A Member Of