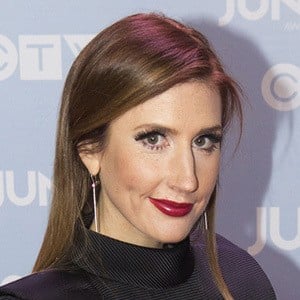 Canadian television personality known for her work as host of MTV Canada's program The After Show and its various incarnations including The Hills: The After Show and The City: Live After Show with co-host Dan Levy. She's also appeared on Canada's Smartest Person and The Goods on CBC. Since moving to Los Angeles, she's worked as a producer for the OWN Network

She also graduated from University of Toronto with a degree in English and Drama.

Her philathropic activity includes working extensively with the organization Free The Children, for whom she's filmed MTV specials.

Her mother is Joyce Resin who hosted a CBC show called Alive: The Picture of Health and her older sister Amanda Grace works as a reporter and anchor for KING-TV in Seattle.

Cruickshank was part of an all-male improv comedy group alongside actor Seth Rogen before becoming a television personality.

Jessi Cruickshank Is A Member Of