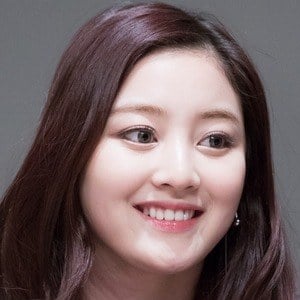 South Korean pop singer who became known as the lead singer of the nine person girl group Twice, which was formed by JYP Entertainment through the reality show Sixteen. They are known for their debut album The Story Begins.

She was originally scouted by JYP Entertainment after participating in a contest for Junior Naver in the third grade in 2005.

She was also a member of the girl group 6mix before joining Twice.

Her real name is Park Ji Hyo, but she is better known by her stage name Jihyo. She was born in Guri, Gyeonggi, South Korea and grew up alongside siblings, Seo-yeon and Ji-young. She was romantically linked to rapper Kang Daniel.

She and Jeongyeon were both members of 6mix and Twice.

Jihyo Is A Member Of