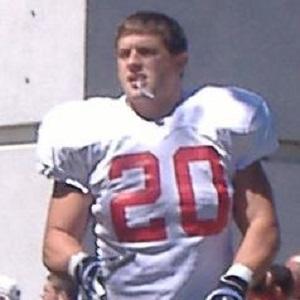 Fullback who played for the Indianapolis Colts and New York Giants from 2000 to 2007; became Mr. irrelevant after the Chicago Bears selected him with the very last pick in the 1999 NFL Draft.

He played college football at the University of Pennsylvania and recorded 2,277 rushing yards, 4th most in school history at the time of his graduation.

In 2011, while he was retired, he and 11 other NFL players filed a lawsuit against the NFL for failing to properly treat head injuries.

He was married to actress Rosa Blasi from 2004 to 2008. He and Rosa had a daughter named Kaia together.

As a member of the Giants, he was the lead-blocking fullback for Tiki Barber.

Jim Finn Is A Member Of