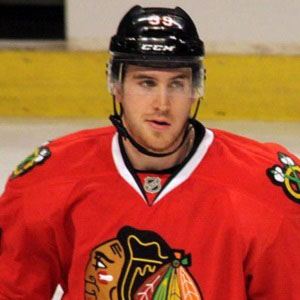 NHL right winger who debuted with the Chicago Blackhawks during the 2011-12 season, then went on to spend two years with the Florida Panthers before a 2015 trade sent him to the Boston Bruins.

In his teens, he participated in the Four Nations and Ivan Hlinka Memorial tournaments as a member of the United States National U-17 ice hockey team. He went on to finish in second place at the IIHF World U18 Championships as a member of Team USA.

While on the Boston College Eagles team, he scored over eighty career points.

He was born in Dorchester, Massachusetts. In 2014, his brother Kevin Hayes joined the NHL team the New York Rangers.

He and Jonathan Huberdeau both played for the Florida Panthers during the 2013-2014 season.

Jimmy Hayes Is A Member Of