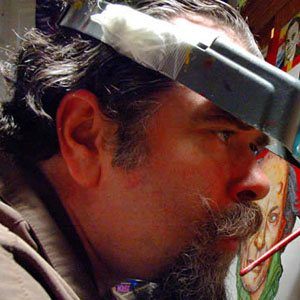 Known for his highly detailed portraits of film stars, high-profile criminals, and others, Coleman also had a career as a performance artist, acting in a 1992 art film titled Black Hearts Bleed Red and in a 2003 movie titled Scarlet Diva.

At the start of his career, he worked as a comic book artist.

His work has been compared to that of the fifteenth-century Dutch painter Hieronymus Bosch.

He grew up in Norwalk, Connecticut. His father served in World War II, and his maternal grandfather was a professional boxer.

Joe Coleman Is A Member Of