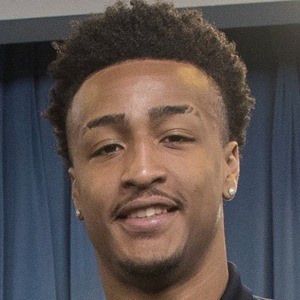 Power forward who was a first round pick of the Atlanta Hawks in the 2017 NBA Draft. In his second, and final, year of college at Wake Forest, he was named the 2017 ACC Most Improved Player and earned first-team All-ACC honors.

He attended Cardinal Newman High School in West Palm Beach, Florida and was named the Florida Class 4A Player of the Year his senior year.

His father John Collins Jr. was in the Navy and his mother Lyria Rissing-Collins was in the Air Force.

He would play alongside Dennis Schroder to begin his NBA career with the Hawks.

John Collins Is A Member Of