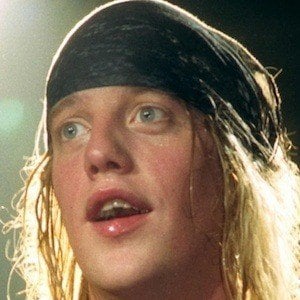 Lead singer and songwriter for the hard rock band Warrant, a group that sold more than ten million records and has released hits like the #2 song "Heaven."

He formed a band named Plain Jane; he and his partner, Steven Sweet, worked low-wage jobs to cope with their financial problems.

He was the youngest of five children raised by Eileen Oswald and Robert Oswald. He was married three times; his third wife, Kimberly Nash, was married to him in 2010.

He wrote the song "The One That Got Away" with Keri Kelli for Alice Cooper.

Jani Lane Is A Member Of