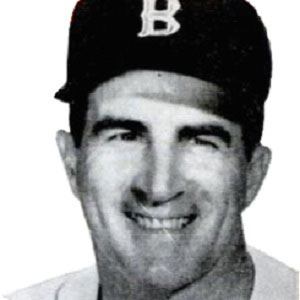 Legendary Red Sox player, manager, and broadcaster who was an indelible part of the organization for more than 60 years.

He set a major league rookie record with 205 hits in 1942 - Hall of Fame-caliber numbers - but spent the next three years in the Navy serving in WW II.

In 2006, on the occasion of his 87th birthday, the Red Sox unveiled a plaque at the base of the foul pole in right field, dubbing it 'Pesky's Pole' - supposedly, for his propensity to curl home runs toward it.

He was born John Michael Paveskovich in Portland, Oregon, the son of Croatian immigrants.

Curt Schilling, the pitcher for the 2004 Boston Red Sox team that won their first World Series in 86 years, remembered kissing and hugging Pesky during the celebration.

Johnny Pesky Is A Member Of