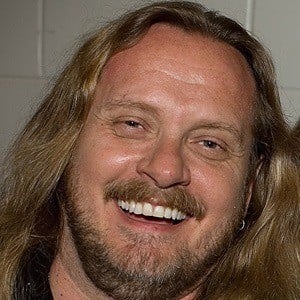 Country singer who became the lead singer of the Southern rock band Lynyrd Sknyryd in 1987. He has released solo albums, including Brickyard Road.

He started his first band, The Johnny Van Zant Band, in the 1970s. The band used to be called The Austin Nickels Band.

He had his appendix urgently removed in May 2006, a day before a huge music festival called The Bone's Bone Bash 7.

His older brother was , the first lead singer of Lynyrd Skynyrd who died in a plane crash.

He and Larry Junstrom have both performed with Lynyrd Skynyrd.

Johnny Van Zant Is A Member Of