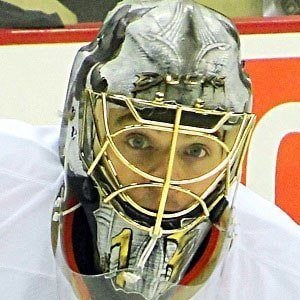 NHL goaltender best known for his time with the Anaheim Ducks and Calgary Flames since coming into the league in 2007. He played in his first NHL All-Star Game in 2011.

He made his professional debut for HC Lausanne in National League A in 2003.

He sat out several games of the 2010-2011 season due to vertigo-like symptoms.

He married a woman named Caroline.

He was teammates with fellow goalie Ray Emery in Anaheim.

Jonas Hiller Is A Member Of