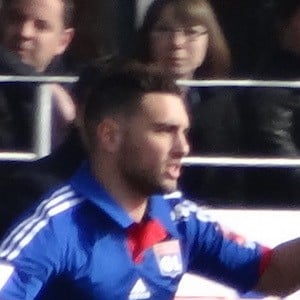 French professional football player who is known for his work as a central midfielder for the Lyon club. He is also known for playing as a midfielder on the French under 20 and under 21 national teams.

His youth career started with the AS Saint-Remoise academy in 1998. He then began training with Lyon in 2007 and joined their B team in 2010 beginning his senior career. He first joined France's under 20 national team in 2013.

He is known for having won the Coupe de France during the 2011 and 2012 season as part of the Lyon FC.

He was born and raised in Cavaillon, France.

He made his debut in the Europa League in November of 2012 after replacing Alexandre Lacazette in the 82nd minute of a match against Athletic Bilbao.

Jordan Ferri Is A Member Of