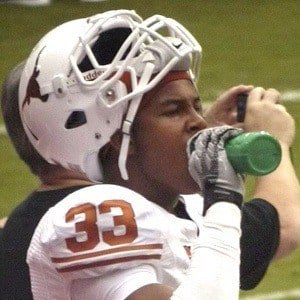 Middle linebacker who is widely known for his time in the NFL. He was drafted by the Philadelphia Eagles in the 2015 NFL Draft, and has served as the team's starting weak side middle linebacker.

He was named a high school All-American following his senior season in 2009. He also earned the Dick Butkus Award that same year.

He played college football for the Texas Longhorns from 2010-2015. He led the Eagles in tackles prior to his November 2015 pectoral injury that forced him to miss the rest of the 2015-2016 season.

He married his wife Ivana in June 2017. He published photos documenting their Greek ceremony to his Instagram.

He recorded his first interception of the 2016-2017 season off of the Dallas Cowboys' rookie quarterback Dak Prescott.

Jordan Hicks Is A Member Of