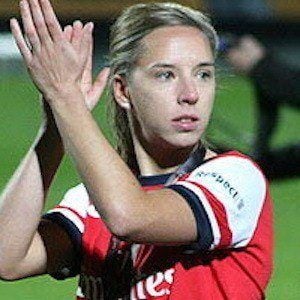 Physical midfielder who is known for her time with the Women's Premier League clubs Sunderland Women and Arsenal Ladies. She has also earned international caps with the England women's national team, including as a vice team captain at the 2015 Cyprus Cup.

She began her youth soccer career at age 8 playing in Sunderland's youth program. She made her senior team debut at age 16 for the Sunderland Women in December 2008.

She was awarded the 2010 FA Young Player of the Year award. She played in only 1 game of the 2015 Women's World Cup due to injury.

She has one brother named Liam. Her father, Keith Nobbs, was a prolific English soccer player throughout the 1980s and into the 1990s.

She has played alongside Steph Houghton as her teammate on the England women's national soccer team.

Jordan Nobbs Is A Member Of