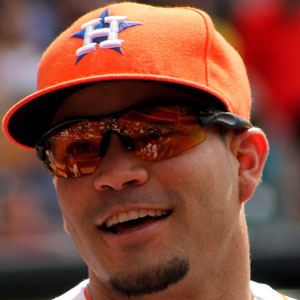 Venezuelan second baseman who had a breakout 2014 season with the Houston Astros, leading the American League in stolen bases and becoming the first Astro ever to win a batting title by hitting .341. He won two more AL batting titles in 2016 and 2017 as well as the AL MVP award in 2017. He helped the Astros win the World Series in 2017 and 2022.

He was originally signed by the Astros as an undrafted free agent in 2007 and had a successful season in the Venezuelan Summer League.

He and his wife Nina had a daughter in 2016. His grandmother passed away during the 2013 season.

He broke Craig Biggio's Astros record for most hits in a season with 225 in 2014.

José Altuve Is A Member Of