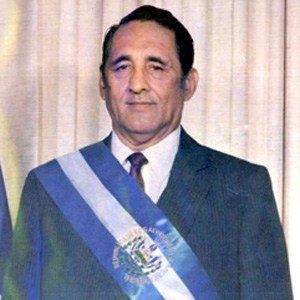 Member of the Christian Democratic Party who was the President of El Salvador from 1984 to 1989. His reign was known for its violence against the civilian population and its human rights abuses.

He was a founding member of the Christian Democratic Party after studying Engineering at the University of Notre Dame.

He led the 1979 coup that brought the Revolutionary Government into power in 1982.

He was married to Ines Duran de Duarte at the time of his death.

He was succeeded by Alfredo Cristiani as President of El Salvador in 1989.

Jose Napoleon Duarte Is A Member Of