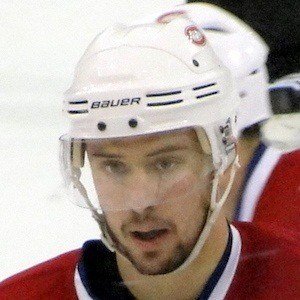 Professional Canadian ice hockey player who is best known as a captain for the Buffalo Sabers in the National Hockey League.

After going undrafted, he was signed as a free agent by San Jose in 2002. He played his first professional season for the NHL in the 2005-2006 season. He was also a member of Team Canada at the 2004 World Junior Ice Hockey Championships.

He scored his first NHL goal against the Detroit Red Wings on January 4, 2007. He then didn't score again until November 24, 2008 against the New York Islanders.

Born and raised in Kelowna, British Columbia, Canada, his grandparents immigrated from Germany to Canada.

As a former team member of the San Jose Sharks, he can be seen in relation to other team members including Mikkel Boedker, Brent Burns, and Logan Couture.

Josh Gorges Is A Member Of