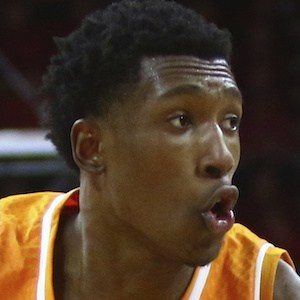 NBA guard whose defensive prowess made him a second round pick of the Miami Heat in the 2015 draft. He worked his way into the Heat's rotation as a rookie.

He was a three-year starter at the University of Tennessee, earning SEC All-Defensive Team honors in 2014 and 2015.

In March 2016, he became the third Miami Heat player in franchise history to be named Rookie of the Month.

He was born to Michael and Alice Richardson, a former fire fighter and Air Force Lieutenant Colonel, respectively.

He made his first NBA start at shooting guard during the 2015-16 season when perennial All-Star Dwyane Wade was unable to suit up for a game.

Josh Richardson Is A Member Of