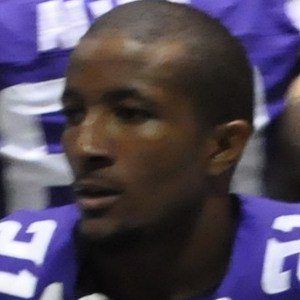 NFL cornerback who was a third round draft pick of the Minnesota Vikings in 2012. He spent his first three years with the Vikings before signing with the Tampa Bay Buccaneers during the 2016 off-season.

He had a standout career at the University of Central Florida, setting the school's freshman record with six interceptions in his first season. He followed it up with two seasons as a first-team All-Conference USA selection before declaring for the NFL draft.

He was a two-way football player as well as a track star in high school, athleticism that manifested in a 4.33 40-yard dash at the 2012 NFL Combine.

He was born to Johnny and Shirley Robinson in Fort Lauderdale, Florida.

His first NFL interception came in 2012 off a pass by Alex Smith, who was then with the 49ers.

Josh Robinson Is A Member Of