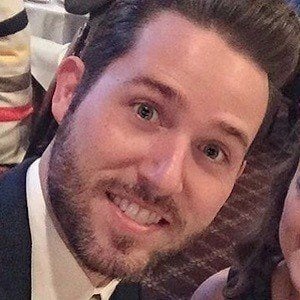 Lead vocalist of The Cat's Pajamas and YouTube sensation who is known for his popular channel JoshuaDTV, which has earned over 1.1 million subscribers. On his channel, he creates challenge videos, vlogs, and comedy videos of varying material.

He first started posting to YouTube on a channel called Joshuad84 in 2008. Before that he studied at The American Musical and Dramatic Academy.

He plays a character named Sara Dikulous in several of his videos. His joshuadtown Instagram account has over 500,000 followers and has featured promotional content for Pamela Rose Rodriguez's music career.

He was born to parents Lisa and Greg and raised in Macon, Georgia the middle child between his brother Jeremy and sister Erin. He was married to YouTube sensation Colleen Ballinger from 2015 until 2016. In June 2018, he proposed to childhood friend Pamela Rose Rodriguez and they married a month later.

He posted the video "WORST CHRISTMAS EVER TAG" with Matthias in December 2014.

Joshua David Evans Is A Member Of