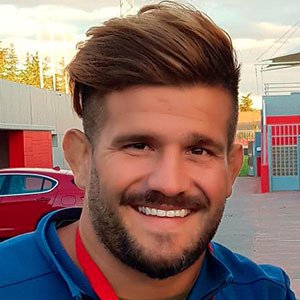 Professional UFC fighter who competes in the The Ultimate Fighters 28: Heavy Hitters. He is the first Spanish MMA fighter to get a UFC win, and the first white and European fighter to obtain a license to fight in Senegal. His nickname is The White Lion.

When he was a teenager, he used to make money organizing youth parties and working as a promoter for several nightclubs.

In 2014 he was elected the Favorite Son of the city of Las Palmas de Gran Canaria and was awarded by Mayor Juan José Cardona González.

He has three older brothers and two younger sisters.

On August 16, 2018, he posted a photo of himself with Dana White to Instagram.

Juan Espino Is A Member Of