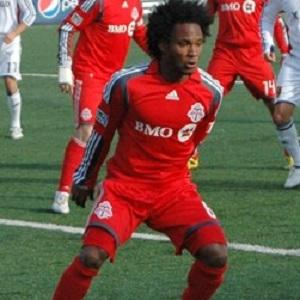 Former defensive midfielder who became an assistant coach for Ottawa Fury. He debuted for Canada's national team in 2002; he has also played for Hannover 96, Deportivo La Coruña, Toronto FC and Ottawa Fury, among others.

He played youth soccer for North Scarborough SC from 1994-1997. He made his professional debut for 1. FC Saarbrucken in 2000.

He was the first Canadian to play in the Spanish La Liga, where he was also voted 2007-2008 Deportivo La Coruña Player of the Year.

Julian de Guzman Is A Member Of