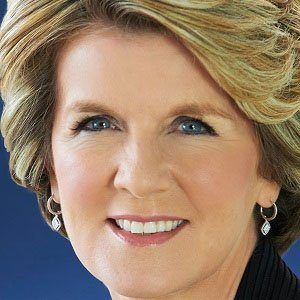 Liberal Party politician who began serving in the Australian House of Representatives in 1998. She also served as Australia's thirty-eighth Minister of Foreign Affairs.

She studied law at the University of Adelaide and business at Harvard University.

Under the administration of Prime Minister John Howard, she served as both Minister for Aging and Minister for Education, Science, and Training.

She was married to Neil Gillion from 1983-1988. She later had relationships with such Australian political figures as Senator Ross Lightfoot and Perth Mayor Peter Nattrass.

Julie Bishop Is A Member Of