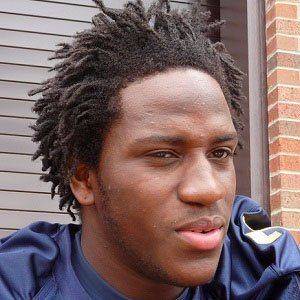 Wide receiver who was drafted out of the University of Michigan in the seventh round of the 2012 NFL Draft by the Kansas City Chiefs. In college, he led the Big Ten conference in yards per reception during the 2010 and 2011 seasons.

He was rated as the fourth best wide receiver prospect in the nation by ESPN while attending Conway High School.

He caught Michigan's only two touchdowns in a victory over Virginia Tech in the 2012 Sugar Bowl, earning him the game's Most Outstanding Player award.

His full name is Kenneth Earl Hemingway, Jr. He was born in Conway, South Carolina.

He has caught passes from Alex Smith in Kansas City.

Junior Hemingway Is A Member Of