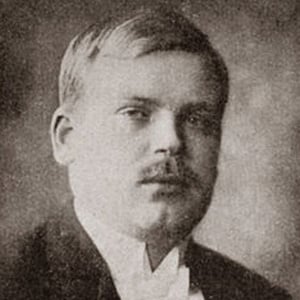 Estonian politician who was a member of the Salvation Committee that signed the Estonian Declaration of Independence on February 24, 1918.

He studied at Parnu Gymnasium and the University of Tartu Faculty of Law.

He founded a new political party in Estonia in 1917: the left-of-centre Estonian Labour Party.

He was born and raised in Arkma, Estonia.

Much like Artur Sirk, he was a prominent early 20th century politician in Estonia.

Juri Vilms Is A Member Of