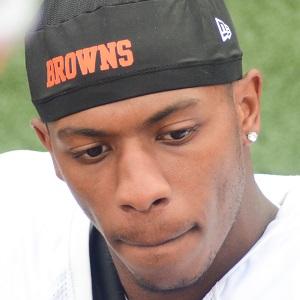 Cornerback who was selected eight overall in the 2014 NFL Draft by the Cleveland Browns. He was a 2013 Consensus All-American and College Football Performance Award winner for being the top defensive back as a senior for the Oklahoma State University Cowboys.

He played both defensive back and quarterback while attending Huntsville High School in Texas.

He was a member of three bowl winning teams with the Cowboys including victories in the Alamo Bowl, the Fiesta Bow, and the Heart of Dallas Bowl.

He was born in The Woodlands, Texas.

He was a finalist for the 2013 Jim Thorpe Award which honors the top defensive back in the country.

Justin Gilbert Is A Member Of