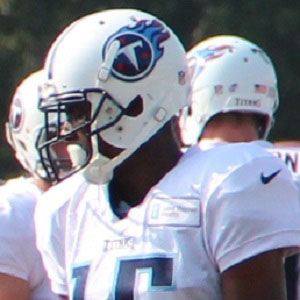 Wide receiver who was drafted by the Tennessee Titans in the second round of the 2013 NFL Draft. He was drafted out of the University of Tennessee, where he was a Second-Team All-SEC selection in 2012.

He played high school football for the Ocean Lakes High School Dolphins in Virginia Beach, Virginia, where was ranked as the eighth best receiver prospect in the country by Rivals.

He was an exceptional track and field athlete specializing in the long jump, having represented the U.S. at the 2010 IAAF World Junior Championships.

His mother is Gloria Hunter.

He joined a Titans receiving corps which included Kendall Wright in 2013.

Justin Hunter Is A Member Of