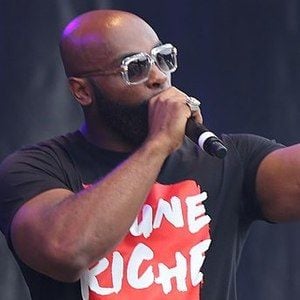 Known for his 2013 debut album Or Noir, which peaked at #3 on French music charts, this rapper also released a popular 2012 street album titled Z.E.R.O.

His first recording was a 2007 mixtape titled 43eme Bima. He recorded his first two studio albums, Or Noir and Or Noir Part II, on the Therapy Music/AZ/Universal Music label.

He collaborated with the rapper Niro on a music chart-ranked 2014 single titled "La Mort ou Tchitchi."

Born Gnakouri Okou, he grew up in the Paris suburbs as the son of emigrants from the Ivory Coast.

He collaborated with the French rapper Booba on several tracks, including "Kalash" and "Criminelle League."

Kaaris Is A Member Of