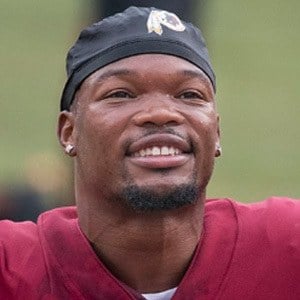 Running back who has gained fame for his NFL career, including for the Denver Broncos between 2014-2016. He was part of the team that won Super Bowl 50 in 2015 over the Carolina Panthers after spending much of the season on special teams and the practice squad.

He began his college football career at Snow College in 2011 and Front Range Community College in 2012. He then transferred to Colorado State University.

He signed with the Green Bay Packers in December 2018. He previously played with the Washington Redskins between 2017-2018.

His parents' names are Keith and Stacey.

He became the third player in NCAA history to rush for 30 touchdowns in a season after Barry Sanders and Montee Ball during his lone year at Colorado State.

Kapri Bibbs Is A Member Of