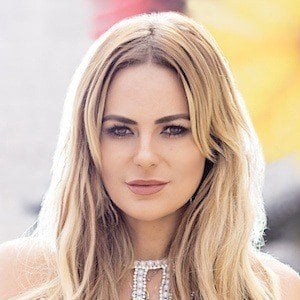 South African singer who first found fame as the frontwoman of the rock band Revolusie before branching out as a solo artist, releasing the platinum album Jakkals Trou Met Wolf Se Vrou in 2011. In 2015, she won the dancing competition Strictly Come Dancing with partner Devon Snell.

She was born in Paarl, South Africa and got her start in music as a guitarist and backing vocalist.

She made her acting debut in 2011 with a role in the film Platteland.

She was previously married to rugby player Derick Hougaard, with whom she has twin sons named Daniël and Eliah. She later wed former rugby player Joe Breytenbach. Together, they have a daughter named Elah and a son named Johannes Samuel.

She is the younger sister of South African pop singer Bobby Van Jaarsveld.

Karlien Van Jaarsveld Is A Member Of