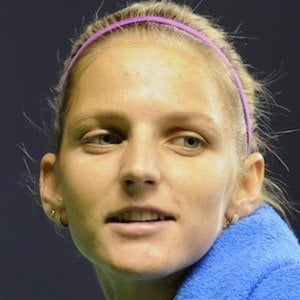 Czech tennis player with numerous victories on both the WTA and ITF circuits who had achieved a world ranking of #7 in August of 2015.

While playing as a junior, she won the girls' singles event at the 2010 Australian Open. Her first senior Grand Slam tournament was at the 2012 French Open.

She and her twin sister Kristýna were the first twin sisters to ever win a double title in WTA history, completing the task in 2013. Their parents are Radek Plíšek and Martina Plíšková.

She fell to Marion Bartoli at the 2012 French Open.

Karolina Pliskova Is A Member Of