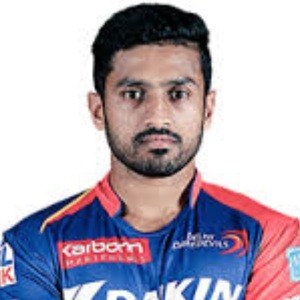 Professional international cricketer who is known for his work with the Karnataka club. He is a right-handed batsman and off break bowler who also competes on the India national team as well.

He first started playing cricket at the age of 10. He made his first-class debut in the 2013 season and helped the Karnataka club win the Ranji Trophy. He then began his international debut in June of 2016 in the One Day International league in a match against Zimbabwe at the Harare Sports Club.

In November of 2016 in a match against England at Mohali, he hit a triple-hundred which allowed India to win the match by 75 runs. He was subsequently awarded as the Player of the Match for his work in the game.

He was born and raised in Jodhpur, Rajasthan, India.

He and Virender Sehwag were the first two Indian batsman to hit a triple-hundred in the Tests league.

Karun Nair Is A Member Of