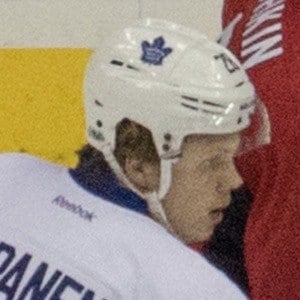 Professional ice hockey player recognized for playing with the Finnish national team. In 2016, the team took gold at the Helsinki World under-20 championship. He was selected by the Pittsburgh Penguins in the 2014 NHL Draft.

He began his junior hockey career as a member of the Finnish KalPa team owned by his father.

In 2013, he took the bronze alongside the rest of the under-18 Finnish national team at the Sochi World Championship.

Though he was born in Finland, he considers himself a Philadelphia native. He spent his formative years there while his father, Sami Kapanen, was playing for the NHL Flyers. He has dated Canadian model Annika Boron.

In 2004 and 2005, he played alongside American hockey player Adam Hall on the KalPa Finnish team.

Kasperi Kapanen Is A Member Of