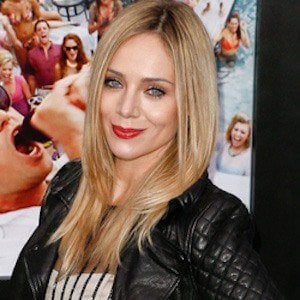 Notable for her role as Chantalle in the Leonardo DiCaprio film The Wolf of Wall Street, Cas is also famous in her native Slovenia as the host of the music television programs Atlantis and Aritmija.

Before beginning her acting career, she studied economics at the University of Ljubljana.

In 2013, she appeared in two British television series: New Tricks and A Touch of Cloth.

Born into a Roman Catholic family, she grew up in Slovenj Gradec, Slovenia. She had a lengthy relationship with Lado Bizovicar.

She played a small role in the Al Pacino and Annette Bening film Danny Collins.

Katarina Cas Is A Member Of