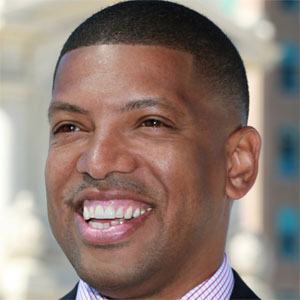 Explosive point guard for the Phoenix Suns who was selected to three NBA All-Star games. He turned to politics after retirement, becoming the mayor of Sacramento, California in 2008.

He was a four-year starter at the University of California, Berkeley, and he graduated as the school's all-time leader in assists and steals.

He was selected 7th overall by the Cleveland Cavaliers in 1987 and after one year with the team, he joined the Phoenix Suns where he was named the NBA's Most Improved Player in 1989.

He and Charles Barkley were teammates on the Phoenix Suns.

Kevin Johnson Is A Member Of