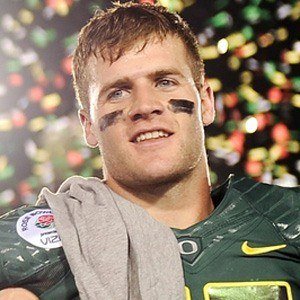 Linebacker who made his NFL debut in 2013 for the Buffalo Bills, where he was Defensive Rookie of the Month in his first month. A torn ACL kept him out of action in 2014, then in 2015, he was traded to the Philadelphia Eagles.

He played college football at the University of Oregon, before being selected in the 2nd round of the 2013 NFL draft.

He had an immediate impact as a rookie, securing 159 tackles and 4 interceptions, en route to being the Pro Football Writers Association's Defensive Rookie of the Year.

He was born in Newton, Massachusetts.

In 2015, he was traded to the Philadelphia Eagles for LeSean McCoy.

Kiko Alonso Is A Member Of