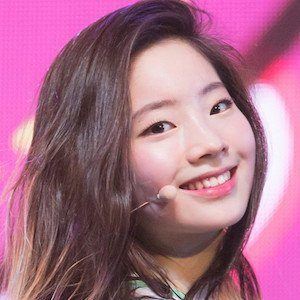 One of nine members of the K-pop band Twice that formed through the reality show Sixteen. They are known for albums such as The Story Begins, Page Two and Twicecoaster: Lane 1. Her full name is Kim Da-hyun.

While in the sixth grade, she published the 2011 viral video of her infamous church "eagle dance" to Hillsong's "The Power of Your Love."

She was scouted by JYP Entertainment after performing a solo in a youth dance festival and became a trainee in July of 2012.

She was born in Seongnam, Gyeonggi-do, South Korea. She graduated from Hanlim Multi Art School in February of 2017. She has an older brother.

She was featured in the Wooyoung music video for his song "R.O.S.E." and appeared in Got7's "Stop Stop It" video.

Dahyun Is A Member Of