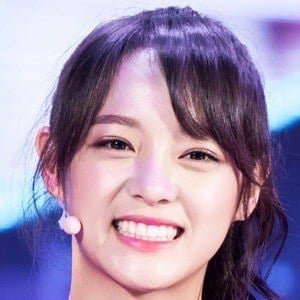 Singer and host most well known as a member of the girl groups I.O.I and Gugudan. She has been seen on the Mnet K-pop survival show Produce 101 and has served as the MC of the variety show Talents for Sale.

She first stepped into the K-pop scene at the age of 17, competing on K-pop Star 2.

She has had guest roles in numerous shows including Running Man, Happy Together 3, and Comedy Big League.

Born in Gimje, she moved to Anyang after her parent's divorce. It was there that she and her brother were raised by her mother and aunt.

On the variety show Talents for Sale, she is joined by cohosts Kim Jong-kook and Lee Seo-jin.

Kim Se-jeong Is A Member Of