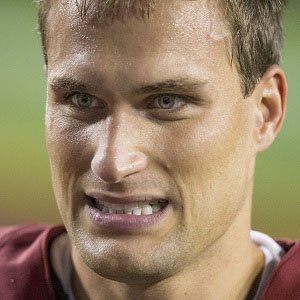 NFL quarterback who was selected by the Washington Redskins in the 4th round of the 2012 NFL Draft. In 2015, he led the Redskins to an NFC East title in his first year as the team's starter. After six years in Washington, he signed with the Minnesota Vikings in 2018.

He was a star high school athlete in basketball, football and baseball.

He was named to the Second Team All-Big Ten during his last year at Michigan State University.

He married Julie Hampton in 2014. He is the son of Don and Maryann Cousins.

He was drafted by the Washington Redskins in the 2012 NFL Draft to be a backup to Robert Griffin III, but eventually supplanted Griffin as the team's starter.

Kirk Cousins Is A Member Of