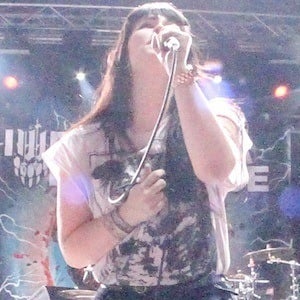 Former lead vocalist of the metalcore band Iwrestledabearonce who led the way on the band's first two studio albums, It's All Happening and Ruining it for Everybody, the former of which topped the US Top Heatseekers chart.

She was an original member of the band from its inception beginning in 2007.

She was supplanted by Courtney LaPlante in the band.

She became pregnant in 2012 which forced her to take a leave of absence from the band. She gave birth to a boy in 2013. She would not return to the band. She married musician Andrew Darroh Sudderth.

The band's name was inspired from a comment Gary Busey once made on Comedy Central.

Krysta Cameron Is A Member Of