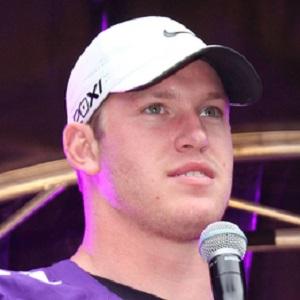 Pro Bowl tight end who was drafted by the Minnesota Vikings in 2011. He caught 53 passes and scored 9 touchdowns during his breakout 2012 campaign.

He attended Elder High School in Ohio, where he was named the top tight end prospect in the country by Rivals.com.

He caught a touchdown pass on the last play of the first half of the Pro Bowl and was later named MVP of the game.

His parents are Jamie and Dan Rudolph.

He played with Adrian Peterson in Minnesota during the running back's MVP 2012 season.

Kyle Rudolph Is A Member Of