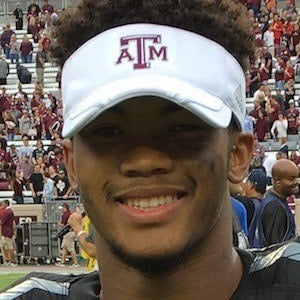 Quarterback who won the prestigious Heisman Trophy with Oklahoma in 2018. He was selected first overall in the 2019 NFL Draft by the Arizona Cardinals and he went on to win the 2019 AP Offensive Rookie of the Year award.

He helped lead Allen High School to three straight state championships. There, he was named USA Today Offensive Player of the Year of 2014 and was twice named Mr. Texas Football. His high school record was 42-0 as a starting quarterback. He became the first athlete ever to be selected for both the Under Armour All-America Baseball and Football games.

He transferred to the University of Oklahoma in 2016 after beginning his college football career at Texas A&M University.

His father Kevin Murray quarterbacked the Aggies from 1983 to 1986.

He was in a competition for the starting quarterback job at Texas A&M with Kyle Allen.

Kyler Murray Is A Member Of