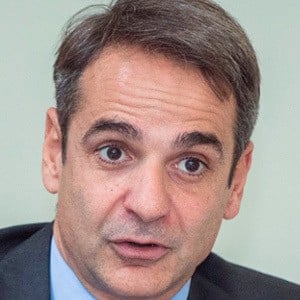 Greek politician best recognized for having served as Prime Minster of Greece beginning in July of 2019. He is also known for having previously served as President of the New Democracy party as well as the Minister of Administrative Reform from June of 2013 until January of 2015.

He graduated from Athens College in 1986 and later attended Harvard University where he earned his bachelor's degre in Social Studies. He earned his Master's from Stanford University he later his MBA from Harvard Business School. He started his career as a financial analyst and corporate financier before venturing into politics by working for the New Democracy's national campaign in 2000.

In January of 2003, he was nominated by the World Economic Forum as a Global Leader of Tomorrow.

He is recognized for being the son of fellow former Prime Minister of Greexe amd Mew Democracy President Konstantinos Mitsotakis.

He served as the Leader of the Opposition under Prime Minister Alexis Tsipras from January of 2016 until July of 2019.

Kyriakos Mitsotakis Is A Member Of