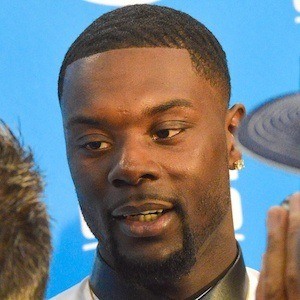 NBA shooting guard who was drafted 40th overall by the Indiana Pacers in 2010. He helped them to the Eastern Conference Finals in 2013 and 2014. He then went on to play for such teams as the Charlotte Hornets, Los Angeles Clippers, Memphis Grizzlies and Los Angeles Lakers.

He led his Abraham Lincoln High School team to four straight city titles, was named the Player of the Year twice by New York Daily News, and was an All-American selection.

He recorded his first NBA triple-double on November 11, 2013 with 13 points, 11 rebounds and 12 assists against the Memphis Grizzlies.

He was born in Brooklyn, New York. He has a daughter named Liara.

Always his own biggest believer, in the summer before his first year of high school he challenged O.J. Mayo, three years his senior, to a one-on-one basketball game; Mayo came out on top.

Lance Stephenson Is A Member Of