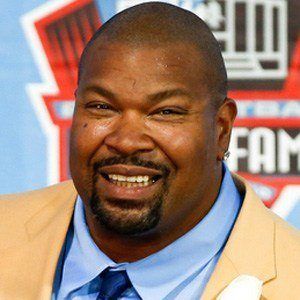 Pro Football Hall of Fame guard who played for 14 NFL seasons, from 1994 until 2007, for both the Dallas Cowboys and the San Francisco 49ers.

He played at Sonoma State University in California, where he gave up just one sack during his career there.

He recorded a bench press of 705 lbs. and was thought to be one of the physically strongest players in NFL history.

His wife, Janelle, was present and held his hand during his Hall of Fame induction ceremony in 2013.

Larry Allen Is A Member Of