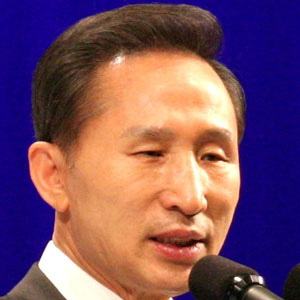 South Korea's tenth President who took office in 2008 and served until February 2013. He first entered politics to become the mayor of South Korea's capital, Seoul in 2002.

He was a successful CEO with the Hyundai Group, spending 27 years with the company and rising the latter to head the Engineering and Construction department.

As president, he sought to warm relations with a hostile North Korea, and emphasized free market reform as the solution to many of the country's ills.

He married Kim Yoon-ok; the couple had three daughters and one son.

A South Korean artist depicted him in a Nazi uniform, resembling Charlie Chaplin's "Great Dictator," and was promptly arrested.

Lee Myung-Bak Is A Member Of