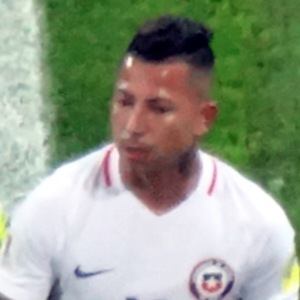 Professional Chilean football player known for his association with the clubs Botafogo and Palestino. He is also known for having played with the Chile national team as an attacking midfielder and winger.

He first started his youth career playing for the Universidad de Chile. He started his senior career with the same club in 2008. After being loaned to several clubs, he earned residency with the Palestine club in 2013. In 2016, he made his debut for the Chile national team.

He won the Campeonato Carioca in 2018 with the club Botafogo and he scored his first international goal in June of 2017 in a friendly against Romania's national team.

Marcelo Diaz and Carlos Carmona are fellow professionals who have also played on Chile's national team.

Leonardo Valencia Is A Member Of