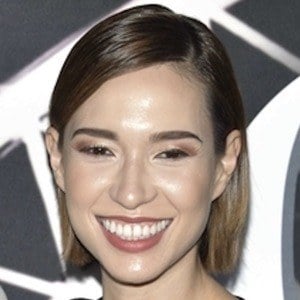 Television personality, actress and former model who has hosted shows on Xing Kong, Fox Sports Asia, Star World Asia and more. She is also famous for her role as Sophie Thomas on the series Point of Entry as well as her appearances on Asia's Next Top Model.

She got her start modeling as a teenager in Taiwan. She later earned a  Bachelor's degree in mass communications from Temple University Japan.

She is a certified yoga instructor who shares fitness tips on her eponymous YouTube channel.

She married Henry Golding in 2016. The two are expecting their first child to arrive in 2021. She is of Taiwanese and Italian descent.

She co-starred with Ya Hui on Point of Entry.

Liv Lo Is A Member Of