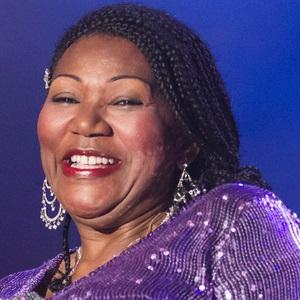 Famous for her work with the disco group Boney M, this dance, pop, and soul vocalist also released such solo albums as No One Will Force You and Share the World. She also briefly belonged to a group called Malcolm Locks that released a 1974 album titled Caribbean Rocks.

In the late 1960s, she performed in a German stage production of the musical Hair, replacing the Grammy-winning African-American singer Donna Summer in the starring role.

Though known primarily as a singer, she also occasionally wrote songs for Boney M, including the 1981 hit "African Moon" (from the group's Boonoonoonoos album).

She was raised in Clarendon, Jamaica, and London, England. With her husband, Thomas Pemberton, she established a music label called Dove House Records.

She and American singer John Schlitt both became born-again Christians. Her 2004 album, Let It Be, was inspired by her faith.

Liz Mitchell Is A Member Of