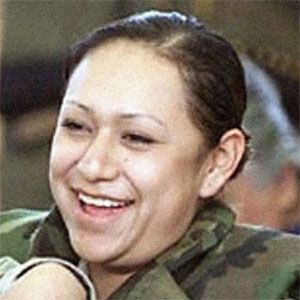 American war hero who served as a U.S. Army Quartermaster Corps soldier and was the first woman in the U.S. Army to be killed during the 2003 Invasion of Iraq and the first Native American woman in history to die in combat while in the U.S. military.

She was given the Hopi name Qotsa-Hon-Mana as a child which translates to White Bear Girl.

Piestewa Park in Arizona was named after her.

She was born to Terry Piestewa and Priscilla "Percy" Baca in Tuba City, Arizona and grew up in a trailer park.

She was honored by South Dakota Senator Tom Daschle.

Lori Piestewa Is A Member Of